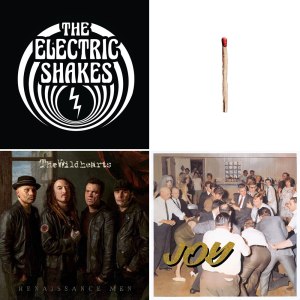 May 2019 has been a varied one musically for me but has been highlighted by a trio of what could be called comeback albums.

Then German rockers Rammstein emerged from a decade of greatest hits tours and side projects to unveil another powerful blast of their Neue Deutsche Harte industrial metal, albeit one without a title.

And then after the best part of 30 years Stray Cats released 40, an album that is certainly their best since their heyday in the early to mid 80s and mark their 40th year together as a band.

On top of that attending my second Super Strong Style 16 wrestling tournament from PROGRESS Wrestling, Guernsey’s Liberation Day celebrations and the appearance of Bournemouth garage rockers The Electric Shakes on Spotify, as well as a couple of other bits, have provided a lot of good listening and made this month’s playlist another varied selection…

Once again Spotify have messed around with the ordering but here’s the full slightly garbled playlist so far this year to listen to:

And as a bonus as its not on Spotify and to mark Guernsey’s annual day, The Space Pirates Of Rocquaine’s alternate version of the island’s national song – Sarnia Cherie (I think this is a demo version from before the release of their debut album Vraic & Ruin)…