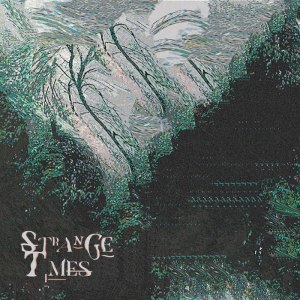 Strange Times, the debut album from Bristol originated, now Brighton based, trio Stone Cold Fiction, originally landed on streaming services and CD in October 2019, but now in conjunction with Guernsey based label Magic Moustache Records it has received a release as a full-scale coloured vinyl record.

The band’s link to the Guernsey based label began when they played the Vale Earth Fair last summer (unfortunately I missed them on that occasion) and was cemented when they visited the island again as part of Independent Venue Week 2020.

It also shows a broadening vision for Magic Moustache who previously have released an album for Guernsey based psychedelicists Lord Vapour and are working with doom trio Brunt.

While the new vinyl release certainly makes for a handsome looking package and fits very nicely in with the bands’ stoner rock style, of course what really matters is the music contained therein and, as it begins with a noise not unlike a tape machine starting up, Strange Times instantly drops us into Stone Cold Fiction’s own world.

A terrific riff starts things proper and pulls us into the dark and atmospheric Mary with a heavy yet still accessible sound that is rare to hear in the current generically polarised world of non-mainstream music.

CCTV meanwhile adds a jazzy twist then Slowburner brings more of the really stoner style grooves that have a strong suggestion of Black Sabbath along with some Pink Floyd style prog.

The groundwork laid by these shorter tracks then seems to pay off with the far more epic Avoiding In A Way that combines heaviness and jazziness, with a surprising level of clean accessibility within the fuzz, to create the album’s first real highlight that, for those familiar with them, comes across like a heavier version of Guernsey grunge merchants Tantale.

The climb seems to start again after that crescendo with Mind On Trial but with its eyes on a higher peak.

As the fuzzy heaviness of slides almost casually into the dark radiance of End the scene is again set for something more and that comes with the ten-minute peak of Landscape.

A tremendous slow-burning epic, Landscape begins with hints of Spanish and classical style guitar lines gradually building with rumbling bass and atmospheric drums to a terrific, cathartic, climax that is followed by some noodling that feels like a storm moving into the distance.

That mood continues with a kind of post orgasmic feeling on Catatonia that wraps the record up making it a complete and satisfying journey through Stone Cold Fictions’ intriguing mix of doom, stoner and jazz rock that doesn’t just show them as being extremely advanced for a band so new, but also that they have the potential to appeal far beyond their own, already dedicated, fan base.