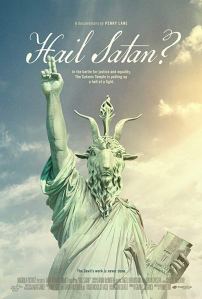 Given its subject it’s probably no surprise if you follow my blog that Penny Lane’s 2019 documentary Hail Satan? has been on my watch list for sometime.

That said, as I hit play on Netflix tonight, I still didn’t really know what to expect from it as the subject matter, on the surface, could easily lead to a film in the tradition of Louis Theroux’s Weird Weekends, or similar slightly mocking looks at particular subcultures (though Theroux’s 90’s documentary series for the BBC were terrific).

As Hail Satan? begins with a slightly shambling and poorly attended rally led by a man in a pair of fake horns it certainly looked like it might go that way.

What Lane does with the subject though, which traces The Satanic Temple (TST) and their attempts to point out the religious hypocrisy apparently inherent in the governmental system of the United States, is build from this rather humorous opening to explain the outlook of the organisation, their growth over the last decade and their more public work.

The early parts of the film invoke Anton LeVey and his Church Of Satan but quickly go on to point out how TST differs and, while the whole thing is clearly a positive view of the Temple, (appropriately) it never feels preachy in its positivity, instead presenting us with what certainly appear to be facts and leave us to make up our minds – in many ways making it a perfect representation of what they stand for.

As the film goes on we meet many members of the temple and, while it’s fair to say there is a trend to the ‘alternative’ in them it is a broader group that general stereotypes would suggest including a chap in blazer and bow tie you’d expect to be from a very different religious persuasion.

Meanwhile the most media friendly of the founders, Lucien Greaves, becomes the main talking head and, after initially appearing somewhat standoffish, soon becomes the embodiment of a reasonable man, particularly when contrasted to an Arkansas politician who is trying to have a monument to the 10 Commandments erected at the state capitol which TST are, in their way, protesting.

This protest (and other similar ones) become the general thread of the film showing the Temple’s general opposition to ties between church and state which is what marks it as a particularly modern American movement.

Refreshingly at no point does it seek to mock the opposing view (with a couple of extreme notable exceptions, like the Westboro Baptist Church) but rather shows quite why the protests (and later law suits) more than stand up in rather clever ways.

Lane also doesn’t shy away from showing that, like any similar organisations, TST has already had its own ‘schism’ though it seems to have been dealt with in a far more measured way than those seen elsewhere and the Temple member who apparently caused it appears to remain generally positive regarding the organisation as a whole.

Hail Satan? then paints a fascinating portrait of The Satanic Temple in a way that, while clearly coming from a positive outlook, is compelling and convincing.

To a degree it leaves a lingering question as to where the media stunts end and the actual ‘religion’ begins (it’s made clear that this isn’t a religion in a traditional sense and no one really seems to worship an actual Satan figure), that almost is part of the point and I have to admit I’m more than interested in exploring TST further now.