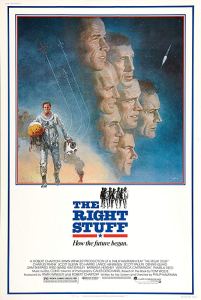 As we head towards the fiftieth anniversary of the first manned moon landing it seems my interest in the pioneering aspects of space travel have been piqued.

A couple of weeks ago I watch documentary about the Apollo mission, For All Mankind, (also there’s a ‘blink and you’ll miss it’ reference to the film in Captain Marvel that I also recently saw) and now I come to something even earlier, The Right Stuff, a drama from writer/director Phillip Kaufman, based on the book by Tom Wolfe.

The film follows the story of the beginning of the USA’s manned space flight programme with the formation of the ‘Mercury Seven’ group of test pilots come astronauts, while also providing a parallel tale of test pilot Chuck Yeager as he strives to find recognition after being cut from Mercury on a technicality, despite being the first man to break the sound barrier.

While that sounds reasonably straightforward, at just over three hours, Kaufman presents events with an epic sweep at once showing the personal side of the story for the astronauts, their families and Yeager, along with the political machinations going on away from Cape Canaveral, with a sprinkling of questionably sourced German rocket scientists the back story of whom could probably be a film in its own right.

While the sequences with the political angle are interesting, and mostly based around the idea that the programme goes ahead despite the awful ideas of the powers that be. Vice President Lyndon B. Johnson comes across particularly badly in this regard as something of a self-promoting fool, and his main aids and informants aren’t much better.

The best parts of these sequences of men smoking in darkened rooms really is the archive footage of Russian cosmonauts Yuri Gagarin and Gherman Titov and the USSR’s, initially more successful, ‘space race’ efforts.

The bulk of the film then focuses on the Mercury 7 team of astronauts. All played by familiar character actors (including Ed Harris, Scott Glenn, Sam Shepherd and Lance Henriksen amongst others) they do a great job of elevating them above being the two-dimensional characters they could easily have become given how much other information is packed into the film.

This means we get behind them in their mission to reach outer space and, when things don’t go exactly according to plan, we are firmly on side with them, even when the characters may not, in traditional Hollywood terms, always be the most endearing.

Along with this the whole thing looks authentic with a great sense of the slightly improvised nature of a lot of the technology as it was created in the years immediately post World War Two and then on through the 1950s and early 1960s right up until we hit the moments that, given the technical limitations of special effects outside of Star Wars in the early 1980s, would have been next to impossible to film.

So while the rocket launches and aircraft tests we see look great, Kaufman takes another angle on things once we ‘push the envelope’ (to quote the film) with the pilots and astronauts.

Instead he mixes a sense of emotional reality with something of a mild psychedelic feel that really brings home the impressive otherworldliness of what these men were doing.

This is most impressively brought into focus by a fascinating sequence with native Australian aborigines that I would love to have seen explored further were the film already not pushing its own envelope of a running time.

While this is all great, and I have to admit I really enjoyed the film, possibly due of my previous interest in the subject, it could be argued that it is stylistically something of a mess.

For the most part its naturalistic to a fairly high level with parts that seem to draw on the vérité movement, however at times Hollywood epic forces its way in, leading to a few more expressionistic moments which, along with the aforementioned vaguely psychedelic parts, make it feel a bit imbalanced and with the lengthy running time I can see why this may have put off audiences on it originally cinematic release that was, commercially at least, deemed a flop.

On top of this the various threads seem somewhat disjointed at points and the switch of protagonist after it feels like our lead has been established, could make it hard to pick up the threads, particularly for a post Star Wars audience.

In a lot of this The Right Stuff feels like a product of its time falling between the more auteur and artistic style of the New Hollywood, the traditional historical drama style and the blockbuster that was becoming prevalent at the time of its release.

This all means that it may really only be a film for those with a real interest in the subject or, potentially, film history but regardless it is the story of a piece of history that is astonishing and one that I think is often overlooked or taken for granted in this era where commercial space flight is in its infancy and people are in long-term orbit on the International Space Station while most show not even the slightest interest in this permanently astounding feat for humankind.