Wednesday nights are a strange night for a gig in Guernsey – while the midweek is packed with open mic nights and the occasional lower key cover band outing, new original music tends to stick to the weekend. So, it seemed an odd choice when The Doomsday Project announced their album launch for a likely cold (it was) Wednesday night in February.

Seeing their audience though it all became clear as, along with the well-meaning parents, aunts, uncles, etc at The Vault, the crowd was mostly at the higher end of school age, and the night fell in the middle of half term.

Support for the show came in the form of Elliot Falla and, while recent discussion on social media centred on James Bay and his ilk got me wondering if the world really needs another soulful, young, middle class, floppy haired, singer songwriter with an acoustic guitar, this didn’t matter to the audience.

Tightly packed to the front from the off they greeted every song (both originals and covers) as if they were already smash hits, and of course anyone getting up on stage and pouring their heart out into a microphone is to be appreciated on at least some level.

While Elliot seemed to be giving it his all on stage, I found it hard to get into his songs as the sound mix coming from the PA left much of the music lost in monotone bass drone. From what I could hear though the young man demonstrated a varied vocal delivery, with a rougher side hinted at from time to time, although there were a few points where the power he was going for seemed a little forced.

Despite being opening act Elliot was granted an encore (after what felt a little like his more enthusiastic admirers called for one while the rest of the bar continued chatting) and delivered an acoustic take on Arctic Monkey’s Mardy Bum that ended his set on a high and left me wanting to see him play where I could hear a little more of the definition in his music.

As soon as Elliot left the stage the young crowd surged further forward, packing in as tightly as they could in anticipation, leaving the older contingent a bit more breathing room further up the bar, and it wasn’t long before The Doomsday Project launched into a cover Chelsea Dagger and got the crowd singing along for the next hour and a half or so.

After a couple of tracks the sound in The Vault seemed to level out making things at least slightly clearer and certainly clear enough for the upbeat, smiley, pop punk barrage that was to come. Across the set The Doomsday Project played every original song in their repertoire interspersed with covers, including a nicely rough and ready take on The Hives Tick Tick Boom and early mock-punk favourite Jilted John’s Gordon Is A Moron.

As always bassist/vocalist George Russell was the charismatic centre of attention, playing to his crowd with a real frontman style, but not in a way that became cocky and just seemed like he was having a great time while both guitarists, Alex Ogier and Adam Walford, were more forthcoming on stage than I have seen in the past.

Having gigged regularly for the last couple of years has seen the band become very tight on all but the newest numbers and they played here with a real solid confidence.

Later in the set The Doomsday Project were joined by Sophie Mahy, as seems to have become traditional, but with the direction the band have taken since their first shows her rendition of Evanescence’s Bring Me To Life felt a little out-of-place amongst the punkier material.

Another unfortunate moment came when George swapped to acoustic guitar for Anymore, one of the band’s most accomplished and mature songs, but was almost drowned out by feedback for the tracks duration, once the soundman got round to turning the guitar up at all.

These couple of off moment were generally eclipsed though by the positivity and upbeat tone of the rest of the set that, while it became something of an endurance event (as we neared midnight and the two hour point), showed one of Guernsey’s few genuinely young and upcoming bands putting on a show and taking their next step forward, but I couldn’t help but feel it would be good to see them put more faith in their original songs and play to audiences more away from their comfort zone.

You can see a full gallery of my photos from the show on the BBC Introducing Guernsey Facebook page by clicking here.

My review of the show was published in The Guernsey Press on Saturday 14th March 2015: 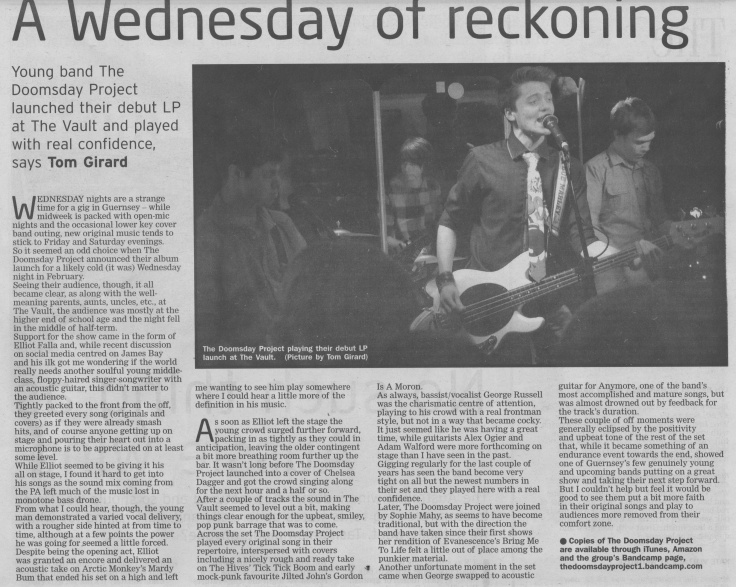