From a first glance at the album cover, as well as the title, its clear that Way is taking some influence from Bowie, but that’s more on the design side of things than the music, as what’s on the disc (or download depending on your preference) is very clearly Gerard Way.

Continuing where My Chemical Romance’s last album Danger Days: The True Lives Of The Fabulous Killjoys left off, but with something else thrown in too, Hesitant Alien is a bit of a mish-mash of sounds that seems designed as a concept album, but one where the concept never entirely coalesces.

So while opener The Bureau seems designed to pull us into the world of Way’s new alter-ego (an idea he’s been toying with at least since The Black Parade if not ever since forming My Chemical Romance) which is backed up through all the associated visuals, the rest of the album comes and goes in terms of reflecting this, which, at times, leaves the whole thing feeling a bit disjointed.

That said, individually there are some great sounds here. 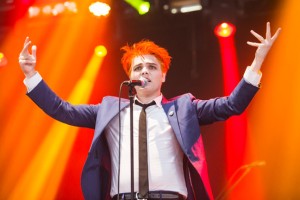 While Britpop has been heavily mentioned in other reviews it is only a small part of the overall vibe on offer. As well as this there are moments of grunge, pop, rock and electronic with a bit of glam thrown in for good measure and something of a debt to Iggy Pop and The Stooges too. Quite tellingly as well, there is nothing even close to the punk or emo-core that made Way’s name in the mid-2000s.

At its best this mix of styles creates a kind of alternate reality sci-fi pop, with fuzzy guitars and bass, some pounding rhythms and Way’s distinctive vocals. At its worst the album is some decent, if not astounding, pop-rock and, while there is certainly nothing bad on the record, there’s not a lot (on the first few listens at least) that really stands out as a sure-fire killer song, though ‘singles’ Action Cat and No Shows come close.

In the end Hesitant Alien sounds like an artist trying to find their sound, an understandable position for a debut solo record, and has some very good, catchy pop-rock with a nice amount of fuzz laced through it. Following the weight of expectation, though, it doesn’t quite set the world on fire like it was clear many had hoped, and some are claiming, it does, though there is definitely something here worth listening to and a lot of promise for what’s to come.