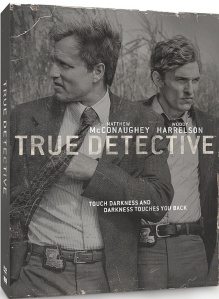 Generally speaking the TV detective drama is not one that appeals to me greatly. From the standard fare of British made TV shows, to the more recent spate of Scandinavian series and more intense and modern British variants, aside from the comic book inflected Sherlock, none have appealed enough in their marketing to make me actually watch.

So I came to HBO’s True Detective hopeful, yet cautious, once my friends’, who’s opinion of TV shows I trust more than any advertising, convinced me it was worth my time.

As things started, I wasn’t entirely convinced as we got a semi-flashback related tale of an ‘exotic’ (for want of a better word) murder that fitted the mould of many seen in films and TV over the years.

What did hook me in though in these early episodes (and the whole series is only 8 episodes long) were the performances of the two leads.

Woody Harrelson has long been a reliable screen presence seemingly easily turning his hand to pretty much anything from the light comedy that made his name in Cheers to more sinister roles in the likes of Natural Born Killers. Here was no different as his conflicted, but generally straight and by the book, detective was as believable and well explored as any TV character I’ve seen.

The real gem of True Detective though comes in the form of Matthew McConaughey. Aside from his impressive cameo in Wolf Of Wall Street, this was the first time I’d seen anything from his screen “renaissance” away from the role he’d been stuck in of romantic comedies and leaning on things in posters, and to say he impressed is an understatement. 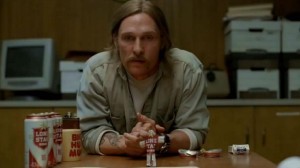 With a character that shows two different sides from the start, his performance across the series is exemplary and he does what is the most impressive thing an actor can do of disappearing into the role. This is something the likes of Johnny Depp try to do through the use of excessive make-up and physical ticks but here (aside from a wig and a moustache) McConaughey does it purely through performance.

The relationship that builds between the two characters becomes the over arching linchpin of the series and is genuinely engrossing to such a degree that there were points where I though the murder mystery might become pure maguffin to the two detectives’ tale. 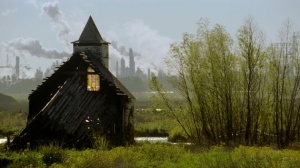 The mystery plot however is the series’ other hook. It’s going to be hard to discuss much without spoilers but, having 8 hours to play with, gives the series time to develop what in a movie would be derivative. This creates a creeping Southern Gothic vibe and make the characters, no matter how big or small, become part of the Louisiana landscape that seems to somehow be feeding the events, with the music acting to complement this in one of the strongest ways I’ve seen in TV or film.

With a culmination that adds this to the high-end of the horror-mystery genre seen in the likes of Silence of the Lambs, but with a whole lot more on top, along with a continued focus on the titular detectives’ lives, True Detective has landed near the top of TV I’ve seen.

It combines real high tension mystery with a deep plot, based both in the mystery and in the characters involved, while keeping enough un-shown to make for a genuinely satisfying conclusion that doesn’t instantly set up, or even hint at, a second series.

Added to this there is a sense that this is more than just a murder mystery or detective procedural, but I think the extras everyone takes away from it will be different, so I’ll leave it up to you to discover those.